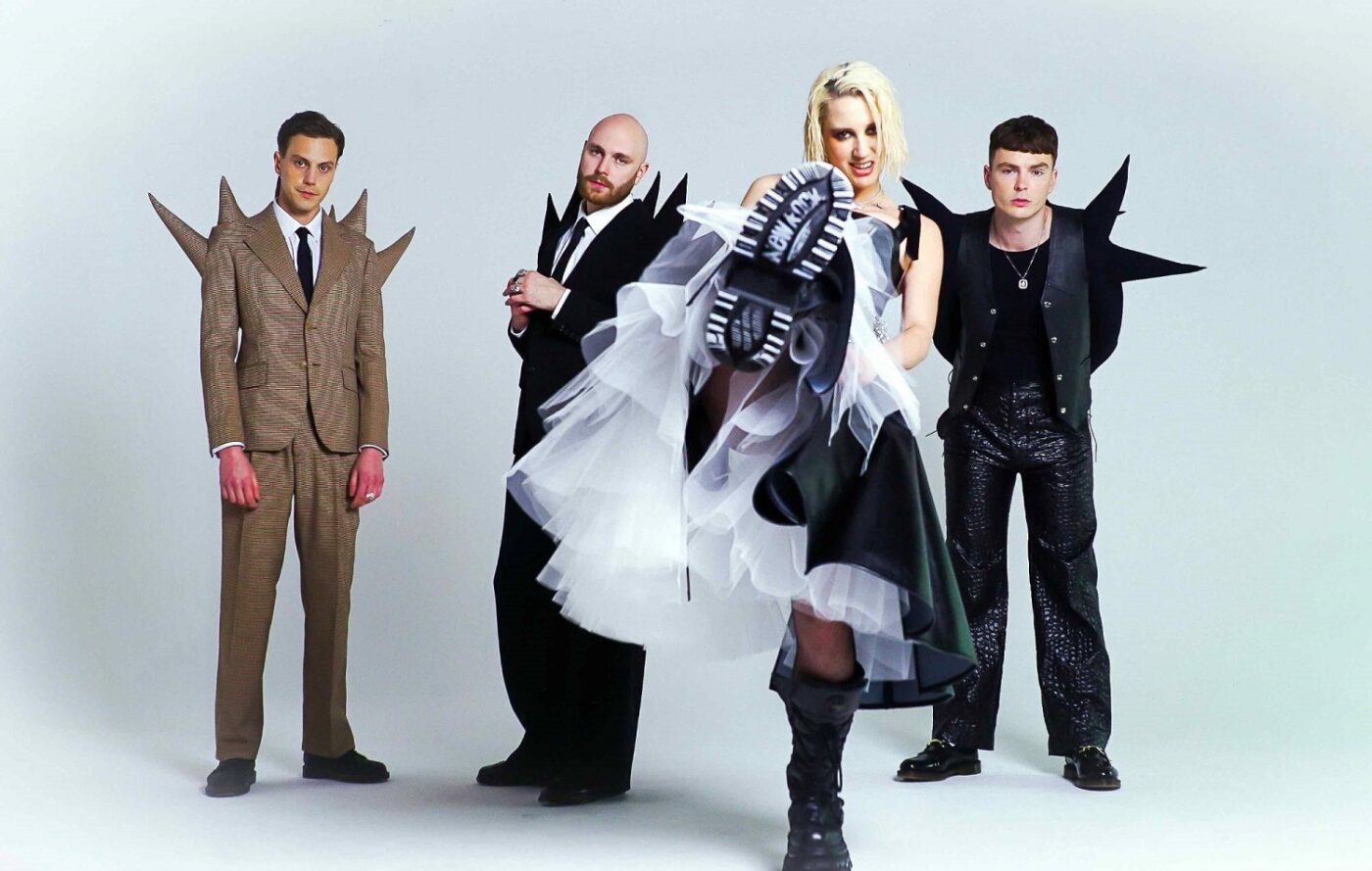 The 3 purple links below serve as wormholes. They’ll take you straight into the pages of the texts you’re studying at school. Use YONAKA’s ideas to develop your understanding of ‘A Streetcar Named Desire’, light imagery and gender inequality!

As well as fuelling our Wormholes class, Theresa talked to the Sound of Pen podcast about friendship, freewill and finding who you’re meant to be.

You know how it is. Some days you wake up and you’re the wrong way round. Or you get to school and everyone in your classroom is talking, but nothing anyone’s saying makes sense. At times like these, we turn to one of the world’s most important bands. With YONAKA’s music blaring in our headphones, the world begins to fall into place and EVERYTHING seems possible.

Even those essays you haven’t written yet stop looming with such dangerous intent. And not just because YONAKA are telling you to believe in yourself – although that encouragement definitely helps A LOT. Key too is the fact that the themes at the heart of YONAKA’s music happen to be the very same themes you’re studying in your English Lit classes.

Which is why we were so excited to speak to YONAKA singer, Theresa Jarvis. No one in 2021 has a stronger voice. And if there’s one thing English students need more than anything, it’s a strong voice.

Just don’t go thinking you’re somehow missing that strength because yesterday you happened to wake up upside down. Feeling like Theresa does when she wrote ‘Seize The Power’ is cool. But don’t beat yourself up for not feeling all-powerful from morning to night…

“No one can be like that all the time,” Theresa laughs. “I really don’t think you can. It’s funny because I’ll catch myself and I’ll be like, ‘Everything’s shit, I feel so empty, nothing’s going right – how did I write that song and I feel like shit right now?’ But when you’re in it, you’ve got to celebrate that moment of being in it and feeling like that, because those moments come few and far between. So, when you’re there, just drink it up.”

It’s such a crucial message. And one we should consider when reading ‘The Handmaid’s Tale’, ‘Blood Brothers’ – or ANY of the texts we’re exploring at school. How is happiness presented? As possible! As something to be treasured! As relief from the darkness!

It’s like Theresa says: “You can’t feel high without the low. You would never feel high, you would just feel normal, right? Because you wouldn’t understand any other feeling from it.”

This kind of thinking illuminates YONAKA’S new mixtape. Just listen to ‘Raise Your Glass’. Radio 1 made it their hottest song of the week and Radio X chose it as their record of the week too – how AMAZING to have this kind of music being celebrated by such mainstream channels.

“It means you’re ready to go! You’re going down the fast lane to where you need to be.”

And if we understand our experiences of omnipotence as fleeting, then we also understand the absolute NEED to use rocket fuel. Travelling by bicycle would take too long. Carpe diem.

It might help us, too, if we consider the above when digging into Theresa’s ‘I shine bright like lightning’ simile – also from ‘Raise Your Glass’. Lightning comes and then it goes. But we notice it. And we remember it.

“If you’re in a room and someone walks in and they literally light up the room,” Theresa smiles, “that’s what I’m talking about! When you feel on top of the world, you are literally beaming. People recognise it.” And although, Theresa adds, “People find it really hard to take on people who are really kind of excitable and loud – which I am,” no one should feel frightened! Those effervescent people should serve as a reminder that: “YOU can be that brightness too.”

Not that every moment on YONAKA’s incredible new mixtape comes in the shape of a storm. The record closes with ‘Anthem’.

“That song has no drums on it,” Theresa explains, “which is the first one we’ve done like that and that was a conscious decision. I want to talk to you, and my voice is very soft – and I don’t (usually) sing very soft! But it needed to be soft because when you talk to yourself and you’re not feeling right, if you talk to yourself hard and angry, it makes things worse, right? If you’re soft and calm to yourself, you just feel safer.”

Wow. It’s so interesting to think about a writer’s tone in that way. And we LOVE that YONAKA don’t just have one ‘sound’.

“With this mixtape, it does kind of go all over the place, it’s a bit crazy, isn’t it? There was a point where we were sending songs, and our management were like: ‘It just sounds a bit all over the place!’ But we were like: ‘Yeah, but it’s still us!’ Not everyone feels one thing all the time and we need to make that okay, that it’s okay to feel all these different emotions.”

And there’s the big message, right there. ‘Seize The Power’ refuses to be one thing and so reflects the idea that NOTHING is one-dimensional. You can follow thread right back to the Renaissance. Shakespeare was absolutely pushing for this same kind of cultural re-evaluation.

All these years on, we are, as Theresa says, “Still having the same conversation.”

We’re still fighting against stereotypes and doing everything we can to celebrate individuality.

“I feel like people love to judge a book by its cover,” Theresa sighs. “It’s happened to me millions of times; it’s happened to, I imagine, everyone. I love proving people wrong! People want to pigeonhole you into certain things and you’re like: ‘No! That’s not what I am!’ I feel – especially with class – you get put towards these certain views and ways and it’s just not true. You’re not supposed to dress differently, you’re not supposed to have a different attitude – I think it’s just utter bullshit. I love how people are showing confidence and showing what they are and what they love, because that’s what life is about. I just want you to feel empowered and I don’t want you to allow anyone else to determine your life and where you’re going. If there’s something you’re passionate about and love, don’t let someone else tell you that it’s wrong or you can’t do it.”

A beautiful sentiment. But why hasn’t everyone bought into this ideal by now? Will people ever put their prejudices to one side? Is resolution in sight?

“Definitely! Especially because the new generation are so screwed on and they’re not taking anyone’s shit – and I LOVE that! I feel like it’s very much an older thing to kind of let things pass by. I feel like young people are the answer because they’re all bright-eyed and they can see everything for what it is and it’s so amazing. I love being around young kids and babies because nothing can touch them, and as you grow older everything feels a bit more damaging, you get roped into things and stuff like that. I definitely think now we’re definitely on the right trajectory, from 400 years ago. Women have way better voice now, where they can stand up for themselves. I think we’re definitely on the right path because the younger generations are just awake, and they’re there to put things straight. You can’t put anything past them. It’s quite amazing.”

Listening to Theresa speak, it’s easy to feel lifted by her brightness. Her music is filled with that same luminescence. She often sings about things shining. Why is the light so important to her?

“It’s like waking up to it. When I say I’m trying to ‘shine a light on,’ I’m trying to share the information, I’m trying to tell you that this thing is better for you. I’ve had the light shine on me, so I know this information, and I’m going to shine the light on you to pass this on. ‘Call Me A Saint’ is just telling you that you’re doing a good job of keeping yourself here, of keeping yourself up – especially people who have got stuff going on in their lives, it can get really tough, right? And I just think you’ve got to be proud of yourself, when you’re doing good, and there’s always a light at the end of the tunnel. A new day is the best thing ever. How crazy is it how things can like change just in the day? You can go to sleep and feel awful, then you wake up and it’s a fresh day and the sun’s shining and the light’s bright and I love that. That makes me feel refreshed. I feel like I get to start again.”

Compellingly, Theresa Jarvis doesn’t only suggest you make the most of those fresh starts. She pretty much orders you to. Look at those titles: ‘Seize The Power’; ‘Get Out’, ‘Raise Your Glass’; “Call Me A Saint’ – each one begins with that imperative. The time has come for us to assert ourselves.

“I just feel like lots of people – I’ve done this myself – like to play it safe. I think it can be damaging because you’re never really experiencing life on the edge. I think, you know, come sit on the edge; come feel what it feels like to do something different and to step outside the norm of what you know. Also, people pretend that they’re okay all the time. They’re like, ‘I’m fine, I’m fine.’ People fake happiness a lot because it’s the easy thing to do and maybe they don’t want to trouble someone else, or they think it’s easier to be just leave it. They don’t want to make the change. I just want to have honest conversations with people – and not small talk because I hate that. A lot of people plod on in life without actually taking control and I hate it, and it’s just so sad because you only get this one life and before you know it, it’s going to be gone and you’re going to be like, ‘Why didn’t I make a change? Why didn’t I do this thing? Why did I stay in this relationship that never served me?’”

That all makes absolute sense – and we’re lucky enough to live in a part of the world in which we do have choice.

We definitely shouldn’t take that freewill for granted. ‘Clique’ – a song featuring guest vocals from Jason Aalon Butler (FEVER 333/letlive.) – fights back against anyone who wants to limit our options. Is it aimed at men? That would fit with the conversations society is having with itself in 2021.

“I just think, give me a break. Stop thinking that I cannot do what you can do, number one. Number two, not do it better than you. I just think you need to let people have their peace. If they’re good at something, let them do it and stop talking over them. I’m so bored of listening to what other people have to say when you’re trying to get your point across.”

Which is why we’re looking forward to the future. We really believe that, when we’re there, it won’t matter so much if we wake up upside down. And that, actually, living upside down will be totally accepted as an alternative to living ‘the right way up’.

Find out more about YONAKA.

The incredible ‘Seize The Power‘ mixtape is out right now!

And make sure to send any thoughts related to this interview here or email jc@soundofpen.com.