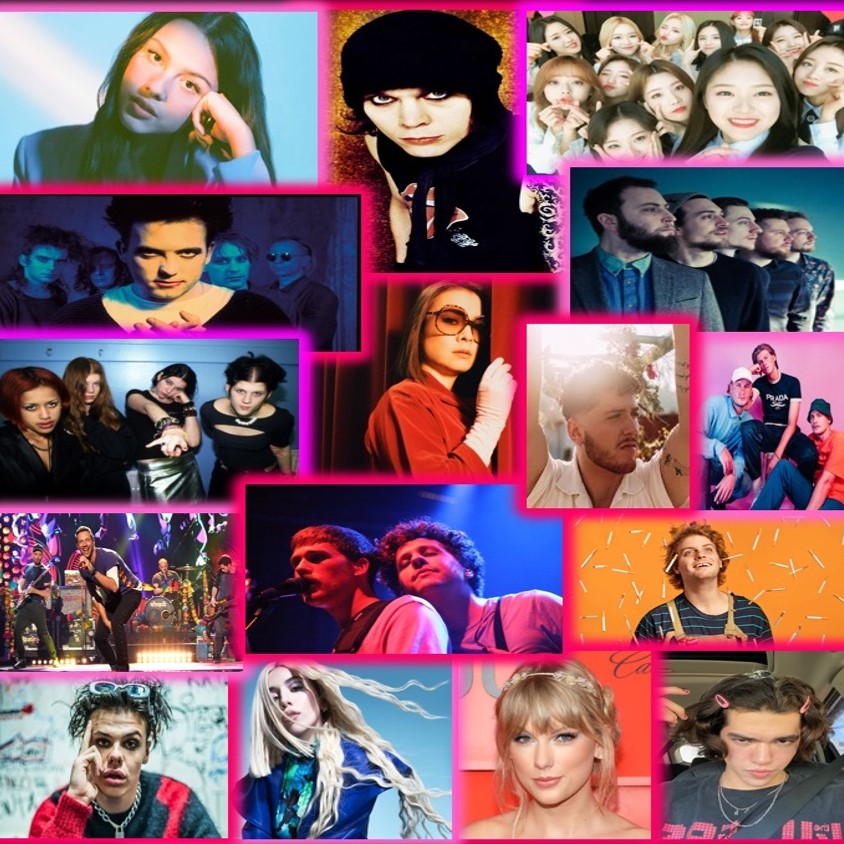 I asked my Sound of Pen students to let me know which songs they were loving right at this moment. I then started to create a series of classes in which we treat those songs as poems (because that is ABSOLUTELY what they are when you mute the drums and guitars) with the aim of helping you practise your comparative writing skills. So, here you go – just when you thought life could NOT get any craaaazier, a lesson based on ‘Spit’ and ‘Kings and Queens’. Well done you for being one of the first people EVER to study the links between early-2000s metallers Kittie and the poptastic Ava Max!

Compare and contrast the significance of female oppression in ‘Spit’ and ‘Kings and Queens’.

Both poems are absolutely built on a history of female oppression. Both poets are motivated by the unfairness of a system that – even in the 21st Century – still limits women’s freedom and potential.

Kittie’s attitudes are highlighted in the phrase: ‘the guy who crept.’ The unnamed ‘guy’ symbolises the male threat. ‘Crept’ is used metaphorically and is aimed at highlighting the hidden motivations of a society that is still widely regulated by the patriarchy. The quietness and stealthiness inherent in that verb choice draws our attention to the fact that women have been oppressed in a way that is sometimes hard to define in absolute terms. It’s equally difficult to pin down the men responsible for this state of oppression – they act out of sight and on their own terms. As a result, the threat from these creeping oppressors feels so intense. The women who fight back against this oppression don’t have the advantage of being able to act undercover. The ‘pop’ of the champagne in Ava Max’s ‘Kings and Queens’ is indicative of the noise the women need to make to get noticed. When juxtaposed with men’s deliberate quietness, that ‘pop’ feels shocking. The sense of shock is fitting, though. We should be shocked by the noise a woman has to make to be really seen.

The title of Kittie’s poem underlines their feelings. The aggressive ‘Spit’ reflects the antipathy Kittie feel towards their oppressors. Their repugnance can again be linked to that word ‘guy’. The singular situation of the ‘guy’ highlights his isolated position. He might celebrate this feeling of being independently powerful, but Kittie are insulted by his selfishness and narrow-mindedness. Kittie speak for ‘all the girls’. That pronoun speaks volumes. Kittie are fighting on behalf of every female. Ava Max picks up that same baton. She writes about ‘queens’ – and the plural nature of the metaphor hints at women’s desire to unify and neutralise the oppressor’s typical tactic of dividing and conquering. Ava Max’s metaphor clearly indicates the power so inherent in women. And her ‘Kings and Queens’ title is absolutely suggestive of the equality that should exist between men and women. The ‘King’ metaphor feels more optimistic than Kittie’s disdainful ‘guy’, but in essence both poets are reacting to the oppression that has manacled one half of the human population throughout much of history.

The contrast between the poets’ attitudes towards the men responsible for female oppression and the women who have suffered that oppression is marked. These men lurk in the ‘shadows’ – once again highlighting the oppression they have enforced upon women as a product of darkness and evil. Forces for good don’t typically live in the shadows, they are out in the light, sitting up on Ava Max’s ‘thrones’. The absence of rhyme within ‘Spit’ really illustrates Kittie’s contempt for those responsible for female oppression. On one hand, it represents Kittie’s extreme anger. Their emotions are raging so of course there is no regular rhyme scheme; the way the world works is beyond reason and to try to suggest that anything rhymes – that anything ‘fits’ – would be ridiculous. Ava Max’s assonant rhyme feels just as purposeful, though. It’s as if she can see the potential for a world that ‘fits’. There’s a rhyme hidden in there somewhere. It’s not perfect yet, but we’re closer in 2020 (when ‘Kings and Queens’ was written) than we were in 2000 (when ‘Spit’ was written). That assonant sound feels too like a cry from the darkness, a woman shouting from those shadows the men have tried to drape them in. The more women that shout – and the more of us that hear and understand what the shouts mean – the closer we’ll be to ending the female oppression that both of these poems want to consign to the past.

And just before you go, behold this incredible essay from Sound of Pen student, Alice. She’s already gifted us some incredible Handmaid’s Tale artwork and now she’s back to take your breath away once again! Here’s Alice’s response to that Ava Max/Kittie question discussed above:

Compare and contrast the significance of female oppression in ‘Spit’ and ‘Kings and Queens’.

Both poems tackle the issue of female oppression in different ways. Kittie adopts a more aggressive approach towards female oppression acting as a symbol of rebellion and indignance towards the unfairness of the system. Meanwhile, Ava Max uses a more subtle and encouraging style of resistance through highlighting the strength of the women rather than the evil of the men. Still, both poems are passionate in tackling the female oppression that still pervades our society in the 21st century.

Immediately, the exclamative  “COWARD!!!” emphasises on Kittie’s malignity towards the attitude of men. Men present themselves as potent and imposing in comparison to females. Through calling men a “COWARD!!!”, Kittie inverts this  virility and  exposes the arrogance and absurdity of men in abusing their masculinity against women. One could also argue that men justify their actions through their historical and intrinsic advantage over women. Perhaps Kittie wants to vocalise the concept that  strength does not come biologically and inherently in gender attitudes but rather through the individual’s competence and integrity than the gender that imprison them. Moreover, the repetition of “spit” creates a strident sibilance which serves to accentuate Kittie’s unrelenting attack and resistance on the traditional expectations of women and female oppression. Therefore, Kittie’s approach to female oppression is forceful and assertive as perhaps she believes that the more vocal we are about female oppression the more likely we are to get attention.

Ava Max takes a different approach – one with more hope between gender equality. The title ‘Kings & Queens’ suggests that both female and male could achieve unity and the best in society. Alternatively, one could argue that queens are always bound to kings and the title is another example of female dependence of male and thus is set up to be broken down throughout the poem. The onomatopoeic “pop” reflects the exuberance and power women should be allowed to have. “Pop” could also elucidate the breaking down of patriarchal boundaries and breaking women free from female oppression. The assonant “toast” and “own” constructs harmony between both genders. Unlike Kittie who aggressively fights against patriarchy, perhaps Ava Max suggests that in order to subvert female oppression we need both genders to unify and sympathize with each other in order to build the strength needed to tackle a universal problem like female oppression.

In contrast, Kittie’s poem does not feature any rhyme. This furthers Kittie’s resistance and devotion towards lambasting female oppression. The phrase “the guy who crept” metaphorically shows how men are able to creep away with their vandalism against women and how society condones or even permits this due to their conservative beliefs of female inferiority and in the man’s entitled privilege. One could also postulate that the verb “crept” makes men look lower and in a pitiful position. Again, this inversion of the patriarchy pillories toxic masculinity and reveals their entitlement to female oppression as a decadence and delusion we need to break in society. Kittie’s poem was written in the 2000s where female oppression was more prevalent than in 2020. In order to subvert this obstacle, Kittie employs a more vocal and scathing method of enhancing a message of female empowerment. The semantic field of pejoratives such as “swine”, “COWARD!!” and “spit” shocks the audience who associate women with meekness and thus cements Kittie’s poem as an embodiment of rebellion against traditional sexist values and a call for liberty for women. Typically, early-2000s metallers adopt a metal code which includes opposition to an established authority, and separateness from the rest of society. However, The heavy metal scene developed a strongly masculine “community with shared values, norms, and behaviors.” Perhaps, Kittie wanted more female equality within the mainstream early 2000s heavy metal subculture, as women’s talent were marginalised due to strict stereotypes.

On the other hand, Ava Max addresses  female oppression through the unity of all women and their strength. Similar to Kittie who uses direct address : “For all those girls”, Ava employs the collective phrase: “To all of the queens who are fighting alone” to call attention to marginalized women who struggle alone. However, the verb “fighting” implies that  Ava Max also wanted society to recognize that these women are not inferior and hopeless stereotypically, but are dauntless and a force to be reckoned with .The final line: “Baby, you’re not dancin’ on your own” creates a light, colloquial  and exuberant tone. At the same time, one could argue that it seems like a friendly and motivational reassurance from a strong woman going through similar difficulties. The graceful dialect “Dancin” juxtaposes with the endeavouring “fighting” uplifts the fortitude of women as a charming and vigorous inspiration. Perhaps Ava Max is responding to the rise of domestic abuse for women during lockdown, the struggle of single mothers as well as the presidency of Trump who to many is a symbol of white supremacists and patriarchy. As profoundly expressed by Michelle Obama female oppression is, “still lived in the marrow of our supposedly enlightened society- alive and accepted enough that someone like Donald Trump could afford to be cavalier about it.” Michelle further emphasised, “Dominance, even the threat of it, is a form of dehumanization. It’s the ugliest kind of power.” The metaphor of chess signifies the freedom of women to “free to go wherever they like”. Alternatively, this could be construed as an allusion for better female education (a still dominant global issue, especially in Middle Eastern countries like Afghanistan) and more choices for women to propel and go “wherever they like” in life. Chess is a symbol of intelligence. The fact that Ava alludes to the queen as the most powerful chess piece on the board, highlights the need for women to utilize their potential power for their own ambitions and for the betterment of society. Yet, it’s still inhibited today. Therefore, Ava Max actuates the subversion of female oppression through encouraging unity between women to fortify and inspire each other’s strength , but also between women and men in order to use their sympathy and education to erode this discriminatory oppressive force.

In conclusion, Kittie addresses female oppression by lambasting the ideas that women are peripheral and weak through her scathing and aggressive direct addresses to men. In contrast, Ava Max attempts a men and women symbiosis in order to proselytize sexists ideals. Still, both artists serve as a cardinal force in the musical world to divest the quotidian female oppression in the 21st century through their voice and influence. These artists are people we should listen to and promote as beneath those lyrics and catchy melody is a whole foundation to subvert female oppression and pave the way for a brighter and more equal future between men and women in the so-called-peaceful modern society.

If you’re studying for A-Level exams, Taylor Swift can help you with your unseen poetry!

If you’re studying for GCSE exams, Against The Current can help you with your unseen poetry!