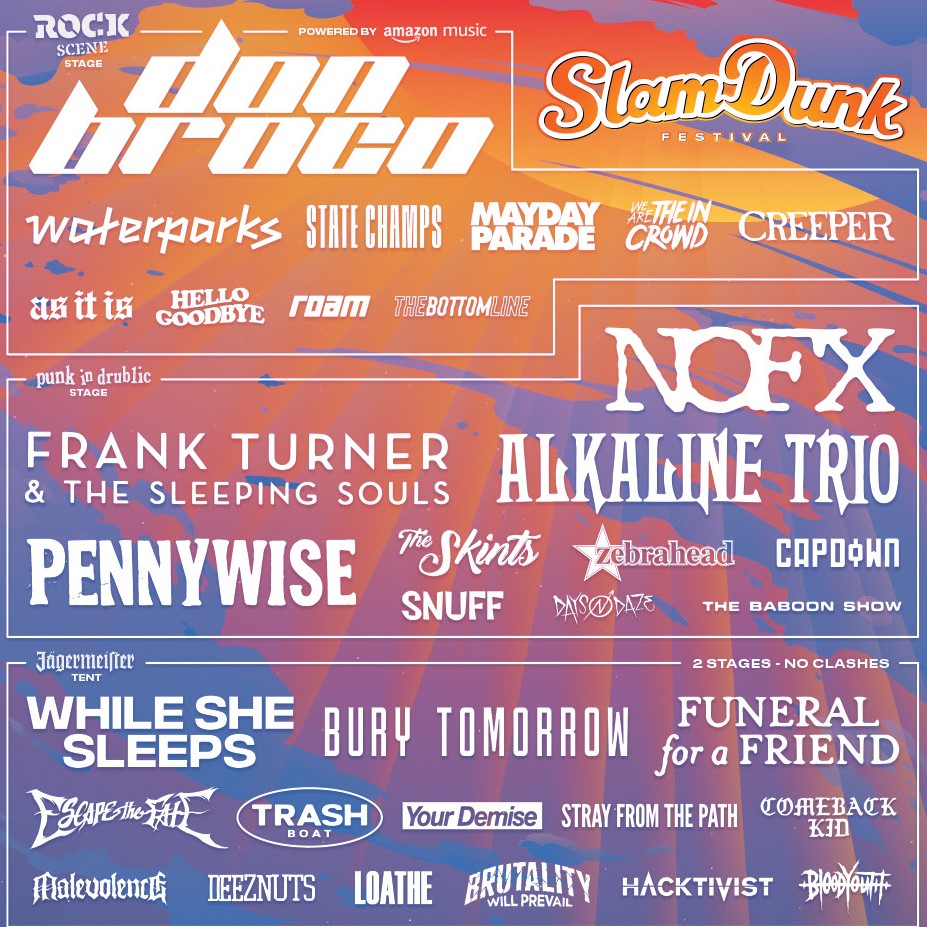 Slam Dunk is such an important festival. It brings together so many of the bands we love and celebrates the spirit that bonds music listeners and songwriters alike. It’s ALSO very worth nothing that when we look at the themes explored by so many of the Slam Dunk artists, we are simultaneously learning to deal with the messages at the heart of our very own GCSE and A-Level course texts.

slam dunk (the literal definition): a ‘slam dunk’ is basketball speak; it is a particularly easy shot, one that is difficult to miss. When completing a ‘slam dunk’, a player thrusts the ball down through the basket.

slam dunk (the festival): a two-day pop-punk/emo/metal event starting in Leeds and finishing in Hertfordshire.

The most difficult task at Slam Dunk (the festival) is working out which bands to watch. We’ve picked out five of the artists we’re most excited by this year. Why are we so crazy for them? Maybe it’s because their individual mission statements are so clear – and we absolutely know that they will do what they set out to do.

Your first task is to simply read about – and listen to – Slam Dunk’s slam dunks. Once you’ve done that, you’ll have a chance to think about your own course texts in relation to the ideas discussed.

VUKOVI’s Janine Shilstone discusses her OCD here. If you’re looking for a band that know all about facing demons and refusing to let those demons win, then VUKOVI are your slam dunk.

Now, consider how VUKOVI force their ball (their message) into the hoop (your soul) with such torpedo-like power. Here are three ideas:

WARGASM aren’t at all happy about the state of the planet. If everywhere you look, you see yet further evidence of the planet’s decay, then there’s no doubt you’ll love watching this band slam dunk their ideas.

Now, consider how WARGASM force their ball (their message) into the hoop (your soul) with such torpedo-like power. Here are three ideas:

Doll Skin celebrate the power of women and articulate the anger they feel towards the men that have held them down. Anyone who cares about equality will be grateful to Doll Skin for absolutely slam-dunking the feminist message.

Now, consider how Doll Skin force their ball (their message) into the hoop (your soul) with such torpedo-like power. Here are three ideas:

Now, consider how Bury Tomorrow force their ball (their message) into the hoop (your soul) with such torpedo-like power. Here are three ideas:

As It Is slam dunk their criticism of the male stereotype in a way that will have you waving your arms in the air and leaping around like a lunatic. Yes, they have a song called ‘Boys Don’t Cry’ but, of course, the point is that they do!

Now, consider how As Its Is force their ball (their message) into the hoop (your soul) with such torpedo-like power. Here are three ideas:

Decide on the message you feel your favourite course writer is delivering to you. Which idea do you feel that author/poet/playwright has absolutely slam dunked?

Make a note of the slam dunk and then, as we’ve done above, consider how your writer has forced their ball (their message) into the hoop (your soul) with such torpedo-like power.

By the time you’ve defined your writer’s slam dunk and listed 3 pieces of evidence as proof of that slam dunk, you’ll find you have a plan for at least one great paragraph of analytical writing – and, quite possibly, the springboard for a whole essay.

It might be fun to start by looking to see if your course writer shares a sense of purpose with any of the artists we’ve celebrated above. So, do feel free to revisit any of the ideas below if they feel relevant:

Okay, that’s almost it for this class. Just have a think about what you’ve achieved today – and send us your notes so that we can assess your progress!

Don’t forget to buy tickets for this year’s Slam Dunk Festival – it’s going to be HUGE.

Now check out our Wormholes classes/podcasts with Holding Absence and YONAKA.