The number 1 song, though, is not by Trophy Eyes (they made it to no. 3), Trash Boat (no. 15) or even Linkin Park (no. 20) – it’s Shallow by Lady Gaga. Which given how much I slam any artist that doesn’t buy into the Sound of Pen scene, or the ethos that goes along with it, might make me seem like a fraud or a hypocrite.

Except I’m not. As you’ll well know if you’ve seen the film, A Star Is Born. Because, sure, Shallow may not have been written by Jimmy Eat World or Neck Deep, but when watching Gaga’s character, Ally, first performing that song on stage, every musician in the world will have felt their heart beating at a million miles per hour.

Every ounce of my being went into that band. The same was true of everyone involved. Every day we put everything we had into writing, recording and touring. We pushed ourselves to the limits, physically, emotionally and in every other way possible. And there were moments when our hopes felt like they might be on the verge of being fulfilled: we met with every major record label in the country; we were featured on a double-page magazine spread alongside Paramore and Bring Me The Horizon as the ones to watch; we had to turn whole lines of people away from venues when our headline shows sold out. It was a sanity-testing, nerve-shredding experience.

But then it never quite happened. So, when it does come together for Ally in A Star Is Born, it’s impossible not to be knocked over by the emotion of the response that Shallow receives. Every time I hear it, I imagine Narration breaking through in the way that Ally does with that song.

And that I guess is the power of music – in it we hear our dreams as well as our heartache. Life with Narration was packed with both and Shallow brings it all back. 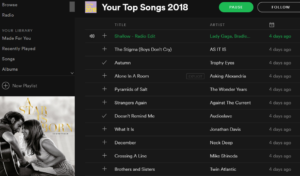