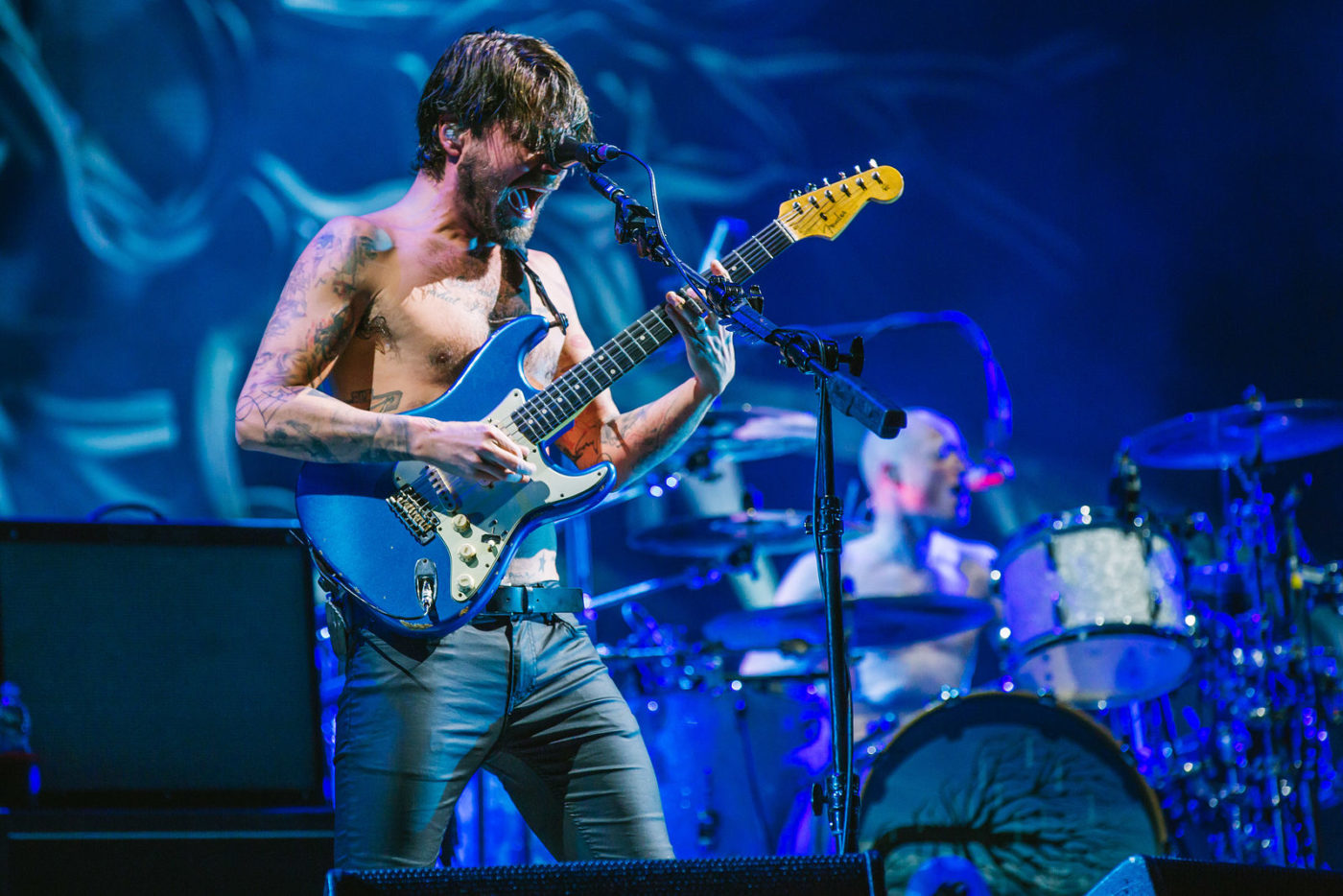 Music is like a map. Everything connects. No musical moment simply exists and then disappears. Live shows are particularly special. They live on in everyone who was watching at the time and everyone who then sees a video of the show and then everyone who gets told something about it. And, after that, more music gets made, and so we become even more connected. Today, we look back a decade to January 28th 2008, when a hopeful Biffy Clyro found themselves supporting the mighty Linkin Park. A pretty cool thread in our grand musical cobweb, we think you’ll agree…

Ten years ago, we still took Linkin Park kind of for granted. They made writing nu-metal music look so easy that we started thinking it actually was that easy. Still, we packed into the O2 arena to see them because, easy or not, listening to every single one of their songs was always like being tied to a rocket and flown into space. Hearing the six-piece live was an experience worth repeating as often as possible.

What made this 2008 show as special as anything Chester Bennington and co. had ever delivered before, though, was the energy that propelled band and crowd alike from the moment What I’ve Done (still LP’s biggest selling single by the way) surged into life. Three records into their career and the Californian outfit were in that magical space between still being relatively fresh and young but also sharp and experienced.

Equally sharp and, in their own way, almost as experienced (debut album Blackened Sky being less than eighteen months younger than Hybrid Theory) were support act Biffy Clyro. That they were playing the O2 at all seemed insane. Simon Neil and the Johnston brothers were kings of the overlooked and figureheads for the underrated, and the fact that they were so widely ignored only made us love and adore them more.

The landscape for the Biff and their hardcore following, however, was clearly changing. In the wake of the incredible Puzzle, released just three weeks after Linkin Park’s latest – Minutes To Midnight – Biffy were on the rise. It was crazy stuff; the idea that a cult British band on their fourth album could actually still have a chance of reaching the big-time seemed frankly preposterous. In the 21st Century, success seemed to come quickly or not at all. Could this Scottish trio actually realise their dreams? Only a lunatic would have put money on it.

Nonetheless, watching Biffy on the O2 stage, it was clear that, at the very least, they were capable of holding their own. They might have left songs such as Justboy and 27 at home for the night, but you only had to listen to newer tracks like Machines (footage is from Jan 29th, the second O2 date) to know that for sure.

Not that Linkin Park were in any way outdone on this remarkable occasion. How could they be? When they arrived on stage, on came a thousand lights and out came an armoury of almost as many unforgettable modern metal classics. Faint, Somewhere I Belong, Numb, Crawling, In The End – each and every one of these anthems exploded in a way that made one thing clear – Linkin Park would shine like a supernova even if those thousand lights were not in place.

In 2018, we can reflect and recognise that Biffy Clyro probably learnt a few lessons from Linkin Park that cold January night. At the time, we were simply awed by the sensational meeting of sensational bands from completely different walks of life. Little did we know that members of both bands would soon develop a penchant for playing without their shirts on…