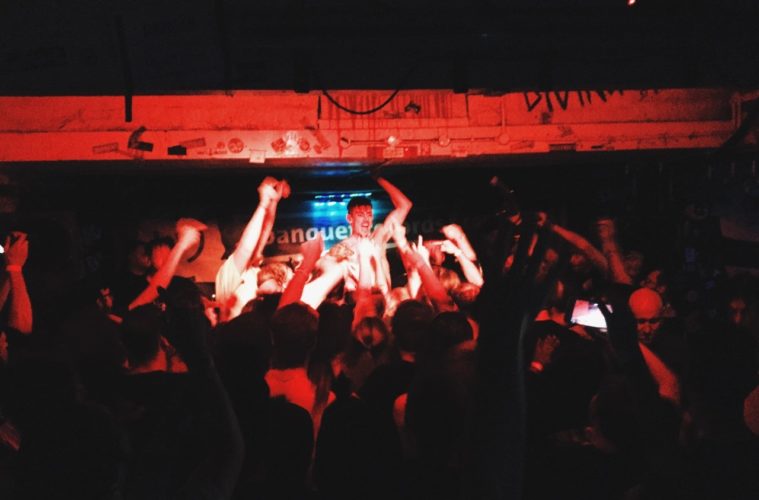 This is a moment. Trash Boat are at their most combustible and anything could happen. The Fighting Cocks, with its tiny venue in the back room of a pub, is dripping with sweat. Both band and audience are caught up in the rising action. Everyone here can feel how special this show is. Why is it such a big deal? You’ll already know the answer to that if you’ve listened to Crown Shyness. The St Albans collective have recently released a record that has turned them from just another pop-punk act into potential melodic hardcore heavyweights.

Being the support band on an evening like this can either be a blessing or a curse. Either you buy into the occasion and appreciate playing a part on someone else’s big night or you spoil the mood by trying to make it about you. Seasonal understand their role perfectly. The affable quartet play a set capable of wooing fans of The Wonder Years and Jimmy Eat World, and even on a night where it’s all about the headliners, their more softly delivered songs make a particular impression.

Trash Boat have already made their impression. They did that with first record Nothing I Write You Can Change What You’ve Been Through, and a touring schedule that saw them opening up for the likes of New Found Glory and Beartooth. Four years on from their debut self-release, though, and it’s clear that training camp is over. Like butterflies with bulletproof wings, they’re emerging from a chrysalis we never really knew they were in. Certainly, if someone had told us six months ago that this five-piece were about to transition into one of the most significant bands in the UK, we’d have been dubious. Yet, here’s the proof.

And frontman Tobi Duncan may kick things off by saying ‘let’s have some fun’ – which we really do go on to have lots of – but what’s so interesting about Trash Boat right now is the fact that they’re actually about way more than simply having a good time. Just ask the people in the immense circle pit that seethes from start to finish, or one of the many singing along with enough passion and intent to turn themselves red-faced – Crown Shyness is an album about trying to come to terms with life, and watching everyone yell out its lyrics it becomes evident that Trash Boat have given people a vocabulary they absolutely need.

The band themselves know they’re on the cusp of something. They’re never even slightly arrogant or cocksure but they do note that this will be the last time for a while that they’ll play a venue this size. Clearly, they think they have a handle on the huge step they might be in the process of taking. What’s not so clear, however, is whether they’re as surprised by their new potential as we are. Did they always know they had songs like the acoustic title track of their new record in them? Tonight, they perform the understated, yet unifying Crown Shyness in a way that absolutely knocks our hearts out of the park. And what about Old Soul, a track so enormous it would be most bands’ standout track and yet, for Trash Boat, now seems par for the course?

Whatever the case, we’re excited to see how things play out from here. Like we said, anything could happen.