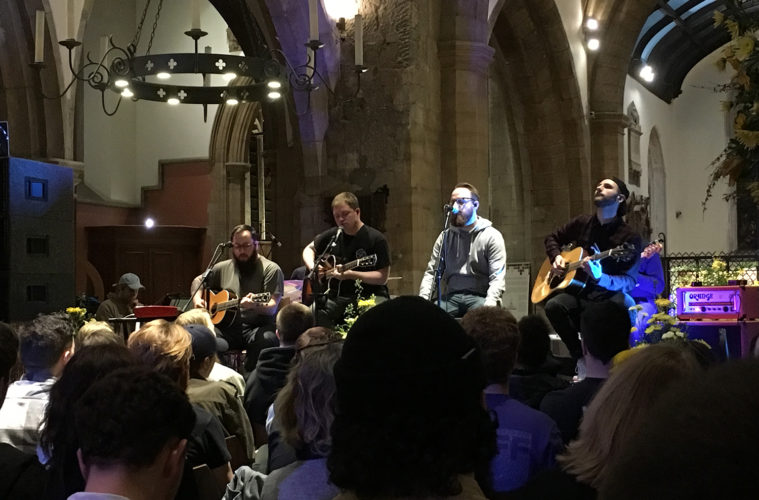 These are indeed the wonder years for The Wonder Years. Having spent more than a decade earning themselves a seriously devout audience, interest in the Pennsylvanian outfit has never been more intense. New album Sister Cities has been eagerly received and more and more people are referring to the band as just a ‘band’; it feels like Dan ‘Soupy’ Campbell and gang are getting a first taste of a life liberated from the pop-punk pre-modifier that has defined them up until now.

Not that anyone who loves The Wonder Years – be that the musicians themselves or their hardcore following – has any intention of forgetting the group’s roots. And what tonight’s acoustic show feels like more than anything is a moment for both parties to share their own private moment in advance of the full tour. During opening song There, There, in fact, it’s easy to look at all the fluttering lips murmuring along to Campbell’s anxious lyrics and believe that we’re all praying for the band’s safe journey.

Unquestionably, this ancient and beautiful Norman church feels like an appropriate setting for the show – it’s as much a communion as it is a gig. Not that it stops Soupy worrying. ‘I feel like I’m going to walk out of here and get arrested,’ he says after considering how many swear words pepper his songs. But there’s no chance of that. The Wonder Years’ music may make for an unconventional form of invocation, but their messages are poignant and pure.

Be it through the spoken-word segments that act like breaks between acts, the revealing insights the singer offers into the music industry (for instance: the massive shops that demand incentives to stock a band’s record, or the late-release tickets for gigs that only go on sale once it’s clear industry types aren’t interested in having them for free), or via the songs themselves, The Wonder Years’ message is as powerful as any delivered on this site since the first King of England was crowned here in 925AD. Certainly, the sentiments at the heart of tracks like Don’t Let Me Cave In speak profoundly about the human experience. As does Pyramids Of Salt, a song which highlights exactly why The Wonder Years find themselves in such a perfect moment. Artists write tracks like this once in their lifetime and tonight the recent single is mesmerising.

As is the whole set. Whether the frontman is recalling the sound of the whole of São Paulo erupting in response to a Neymar goal or singing the title track from Sister Cities or encouraging everyone to sing along to Cardinals, he joins everyone together with his absolute belief that our power and our potential depends on our ability to collect together, to unify, to live symbiotically.

And if the band, despite their stripped-back format, can deliver that idea so forcefully that, during Cigarettes and Saints, drummer Mike Kennedy’s sticks splinter into bits, then one thing’s for sure – the imminent full tour is going to ROCK. And, sure, it may have been over a thousand years since that first monarch was anointed here, but perhaps more relevant is that tonight we’ve been privileged to welcome the new heirs to their alt-emo throne.