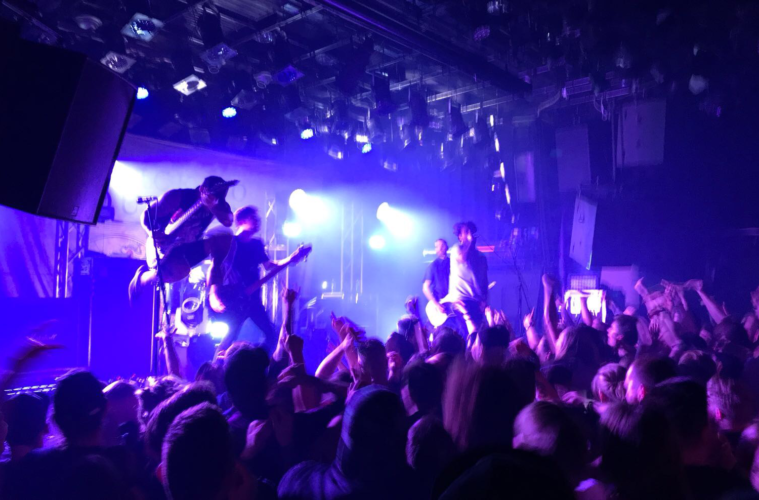 Stick To Your Guns: Melkweg, Amsterdam

​Jesse Barnett has found himself in a brief moment of calm. The swell of the pit in a heaving Melkweg settles, and the drenched, breathless crowd looks up in anticipation. “Alternative music with progressive ideas isn’t nurtured anywhere in the world like it is here,” he stresses. “I hope we all realise how lucky we are.”

Stick To Your Guns are over halfway through their European tour, and you sense he could have said this on any of the previous nights. Except this night we’re in Amsterdam, a city that has nailed alternative and progressive cultures. On your way to Melkweg, you might walk through the red light district, past the fragrant coffee shops and around the wonderful Homomonument. Contrast all that with Trump’s America, Barnett’s home, and you can see why he’s happy to be here.

He’s not the only one. The audience is being treated to what feels like a double-headline show, and if the share of band t-shirts is anything to go by, Being As An Ocean could just have easily been last on. Their set is spellbinding. Where the mood of tracks like Thorns and Black & Blue may have been lost on headphones, tonight we’re left open-mouthed and shivering – this is seriously epic. The vocals of Mike McGough on guitar are mournful and rich and when contrasted with the guttural growl of singer Joel Quartuccio, we’re reminded of the first time we heard Alexisonfire… or We Are The Ocean. There must be something in the water.

And so, by the time Stick To Your Guns hit the stage, we have been truly warmed up. 3 Feet From Peace introduces the set, as it does so well the album, and Barnett assesses his surroundings; “This is a perfect situation. We have no security and a massive stage.” He beckons the crowd to join him, and from Married To The Noise on, they dutifully oblige with a conveyer belt of stage diving. This is exactly why we love this music.

If you’d read the news of Barnett’s recent throat infection on STYG’s social feed, you might have been worried that he wouldn’t be able to deliver tonight. In reality, it’s clear the frontman isn’t going to let anything get in the way of his best. The lively singer conducts the show, and throws himself around the place, with the same energy as his ever-reliable bandmates. “What Choice Did You Give Us?” is screamed at the crowd as loudly as it is screamed back, and when Barnett allows himself a moment from the mic, Rawson and James ensure the message remains loud and clear.

As is increasingly the case, given their ever-expanding catalogue, we wish tonight’s STYG set was a longer one. Still, though, the band do their best to cover all bases; they knock us off our feet with The Suspend and then knock us over again with Better Ash Than Dust. From the more recent material, You Are Free and Doomed By You are standout tracks – both prove that there really is no ‘single’ from True View.

After that, Diamond’s Against Them All makes for the perfect finish, and the spirit of the song leaves those in the pit wondering whether to shove or hug each other. Quite appropriately, they do both. Then Stick To Your Guns leave the stage, and that means we’re left to truly consider how absolutely lucky we certainly are. Could it have been any other way?

Check out the interview we had with George Schmitz from Stick To Your Guns before the show.