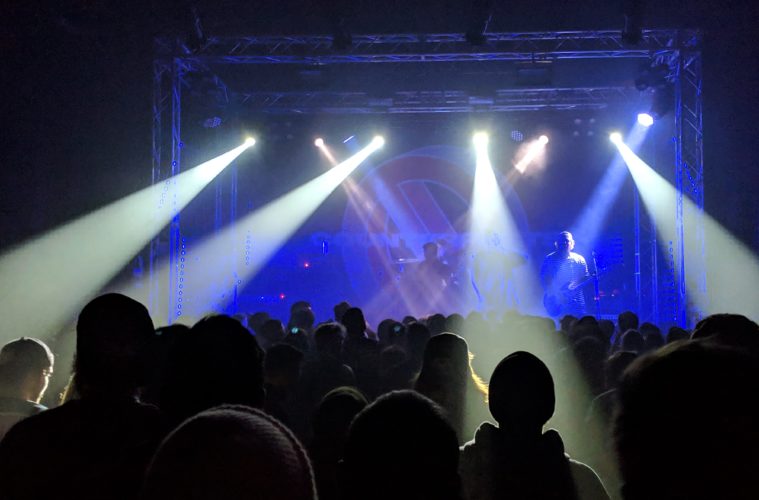 Christmas. Hundreds of presents to buy. Hundreds of pounds needed to buy them. Except no one’s got any money. Not unless you spent your time at school learning to kick a ball well enough to play for Manchester Hotspur or Liverpool United as opposed to writing poetry or reading books or doing all the other things that mean something. And it’s not just the imminent bankruptcy that ruins this time of year. It’s cold. And yeah, Tufnell Park’s Dome is one of the best venues in London in part because it’s got a garden but, as just mentioned, it’s cold. Freezing.

At times like these, then, an outfit like Canada’s Counterparts feel like the most important band in the world. A half hour with them is like taking a trip into another dimension where all you can do is concentrate on making sure your head doesn’t fall off your shoulders. From start to finish, the quintet are crushingly hypnotic, and by the time they finish with The Disconnect, a huge chunk of the crowd are on stage, leaping up and down and yelling along with frontman Brendan Murphy. It must feel as crowded as Oxford Street up there, but a hell of a lot more spiritually fulfilling. But, hey, since when did Christmas have anything do with spiritual fulfilment?

Stick To Your Guns could probably tell you. Never. Not if you live in a world ruled by the likes of Donald Trump. The crowd tonight think they know what vocalist Jesse Barnett is on about and they start excitedly chanting Jeremy Corbyn’s name. But Barnett reminds us that the Labour leader is still a politician so we can’t trust him either. Not everyone’s happy about that. The same people that still think Christmas is a holy time of year perhaps.

One thing everyone can believe in, though, is the music Stick To Your Guns deliver tonight. They play everything apart from the middle section of most recent album, True View, and the material clearly represents a creative apex for the band in much the same way All Our Gods Have Abandoned Us did for Architects. And sure, in relation to Counterparts, STYG might sound a bit like One Direction but compared to almost every other band on the planet they are a hurricane blast. Make sure to put their records on your list to Santa and maybe one good thing can come out of Christmas after all.