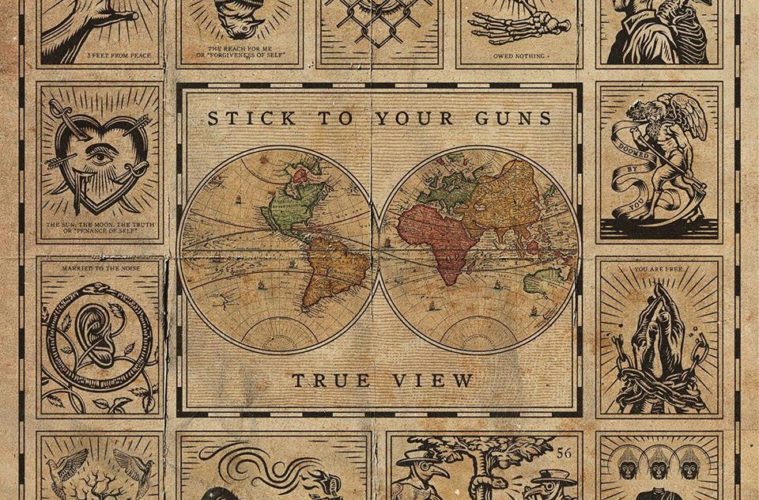 Stick To Your Guns: True View

In a time of such political desperation, isn’t it now more than ever that we need, no, expect our hardcore heroes to be the voice for all of us? Shouldn’t every song be a middle finger to Trump, May and the rest of them?

Stick To Your Guns have made a career out of music fuelled by their anger towards the establishment. Indeed, ‘How can you be an artist and not reflect the times?’ we’re asked on 2016’s Better Ash Than Dust EP. Yet their latest release True View is one that lyrically is much closer to home.

Gone are the emphatic samples of Chaplin and co.; replaced instead by the calming advice of singer Jesse Barnett’s Mum. It was conversations with her that inspired the tracks on the latest album. And in the brutally honest True View, we lie side-by-side on Barnett’s therapy couch as he takes us through the three stages of a personal journey: penance, realisation and forgiveness of self.

3 Feet From Peace introduces the album with a cinematic drama now typical of a STYG album opener, and we’re launched head-first into the tribal storm of Schmitz’s percussion. The Sun, The Moon, The Truth: “Penance Of Self” was the album’s first single and it continues to play the same role in setting the tone for what is to come. Barnett screams with a fury that sounds more personal now, and you feel his inner Corey Taylor now clawing its way out. Married To The Noise follows in the same way it did as last month’s single, and the familiarity of the pairing is as comforting as it is aggressive.

If the theme of penance wasn’t heard by now, the tragedy of it becomes clear in the heart-wrenching Delinelle. ‘This is not an apology…’ howls Barnett, ‘this is a realisation of how I destroyed all the things we’ve built’. Ouch. And through Cave Canem to 56, you’re begging the defiant singer to give himself a break from the self-flagellation. This is heavy stuff in so many ways.

Relief arrives at just the right time through the haunting guitars of Josh James and interval track The Inner Authority: “Realisation of Self”. The energy of the album remains, but now there is a positivity to the rage that punctuates the second half of the album. You Are Free has us punching the air with both fists, while the rhythmic stab of the ‘I’ in Owed Nothing reminds us of Slipknot’s Before I Forget and is every bit as powerful.

And so it is through Forgiveness of Self that we end the album and its concept. The most recent single is also it’s most commercial-sounding and offers an uplifting, if apologetic end to an emotionally-charged record. True View may not be Stick To Your Guns at their most anarchic, but in making it their most personal work, it is more relatable than ever. Through the album’s introverted subject matter, maybe Barnett is reminding us that “As a man changes his own nature, so does the attitude of the world change towards him” (Gandhi). Or maybe he’s just sick of all the anti-Trump songs.