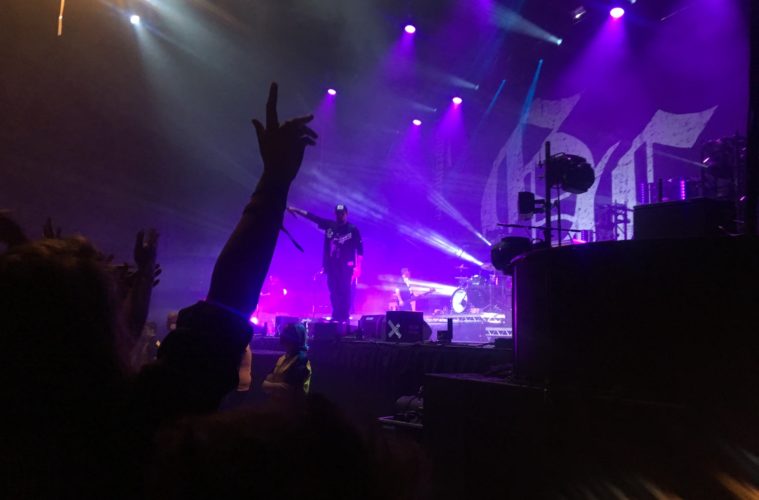 It starts as a cloudy, miserable day in Leeds City Centre. It’s busy, and unwary residents of this fine Yorkshire city might find themselves confused by diversions and barricades. They might be startled too when instead of the usual ambient lunchtime noise all they can hear is a barrage of guitar noise. But one look around at the t-shirt and Vans-clad youths swarming all over the place should assuage any questions: this is Slam Dunk weekend, and because the bands are playing in all sorts of different venues, navigating it is going to require a bit of geographical knowledge and a half-decent sense of direction. Oh oh.

Starting the day off right it’s The Faim, with a headline-worthy performance on Rocksound’s Breakout stage ensuring everyone still suffering from an early morning of travel is now wide awake. As when supporting Lower Than Atlantis last month, the band’s set is primarily made up of unreleased songs but with them all being so catchy, the crowd are singing along to every word by each second verse anyway. The sense of something very cool happening is only emphasised further by the arrival of the sun.

Next, it’s Dream State. The post-hardcore five-piece are pretty new to the scene and fresh off tour with As It Is, but they manage to pack out the Breakout stage with a serious and much-needed dose of heavier, energetic emotional music and motivational speeches, which prepare us perfectly for what comes next.

State Champs are respectively (and understandably so, considering the queue to get in), playing the main stage at the Jägermeister arena. Today, they deliver everything you could wish for from a Champs set: mosh-pits, sing-alongs and new tracks Dead & Gone and Crystal Ball. It’s a shame they don’t play Mine Is Gold but you can’t fault what they do play.

Straight after State Champs, we’re running across the road to the festival’s outdoor main stage for U.K .pop-punk favourites, Moose Blood. It’s reached around twenty-five degrees now, which might explain the slight lull in the crowd (being British, and Northern, it’s difficult to do anything but stand or sit in such heat), but frontman Eddy Brewerton is still putting on a quality show in both a jacket and a hoodie and everyone makes sure to sing along.

Also getting everyone singing along are the mighty Creeper. The Southampton band have spent the last year and a half demonstrating their prowess at filling and captivating any room of any size, and the show they put on at the Jägermeister arena stage is no different. Combining theatricality with undeniably good horror-punk music, it’s no shock that they manage to fill most of the floor AND most of the seats. Tearing through set fixtures Suzanne and Astral Projection with the same energy and emotion given to slower tracks Crickets and Misery, even those who enter the room a sceptic this afternoon leave with a definite appreciation for Creeper.

Back at Rocksound’s stage, it’s a shame that the venue’s emptied a little since earlier because Milestones deserve heaps of attention. Playing tracks from their epic new release Red Lights, they keep the day’s energy going and eventually the venue does slowly start to fill. After that, Pvris make sure energy levels are maintained with one of the crispest sets of the day. Lynn Gunn’s vocals are dazzling, and backed by heart-shaking drums and a light show worthy of the arena venue she finds herself in, Gunn is a proper rockstar.

In the picturesque Millennium Square, Taking Back Sunday are being a bit rockstar-ish themselves by keeping everyone waiting but, after a twenty minute delay, the crowd are finally gratified. And the Long Islanders quickly make up for lost time by going twice as hard as any other act today. Indeed, it soon becomes impossible not to throw yourself into their music, and it doesn’t take long for the passion in the crowd to match that onstage. Adam Lazarra’s signature mic-swinging demeanour combined with his entertaining humility (telling the crowd excitedly how impressed he is by some golden owl statues) means that TBS remain as charming as ever. And given the fact that they’re one of the original emo bands, it’s ironic how purely joyful everyone seems to be as they sing along to the angst-ridden lyrics at the heart of newer songs like Death Wolf or iconic, genre-defining tracks like MakeDamnSure.

Following in the same vein are emo giants Jimmy Eat World. As the sun sets over Leeds, the staging for Jim Adkins and gang seems more spectacular than earlier in the day. The streetlamps on stage seem immediately reminiscent of long nights hanging out around neighbourhoods that seem to be a fixture of growing up as an emo, and Adkins performs with a meekness you might not expect from one of rock’s biggest icons. But that’s what makes JEWS’s performance so good, and although Slam Dunk can’t quite be forgiven for the sound issues that leave listeners a little underwhelmed, even an inability to hear properly doesn’t stop fans from fully throwing themselves into hits like Sweetness and The Middle.

The night’s final band are Good Charlotte. Like Taking Back Sunday, they keep the crowd hanging on but, also like Taking Back Sunday, the Maddens and co. are well worth the wait. They play everyone’s favourites, new and old (although, if you’re like us, and in the 1% of people who enjoyed their Cardiology album, then you might be disappointed by how completely music from that record is overlooked), they shower us with confetti, and they debut brand new single Actual Pain. It’s a brilliant end to a brilliant day.