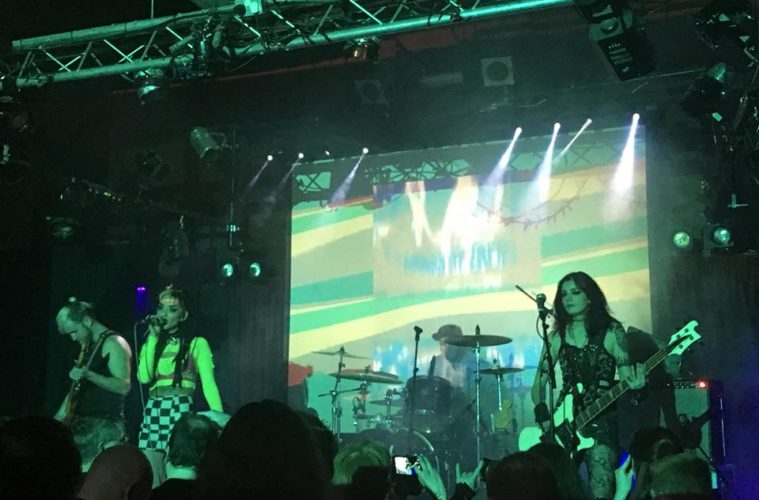 The Lending Room is an unassuming little venue – the kind of place you probably wouldn’t know about unless you were specifically seeking it out. But tonight, it’s far from unassuming – for six hours The Lending Room is turned into a whole other dimension full of swirling psychedelic riffs and layers upon layers of fuzzy distorted guitar, all punctuated with guttural punk yells, screams and clattering drums. Leeds’ first RiffFest is a triumph from start to finish and something Brooders, the psych-punk three-piece who put together the event, should be incredibly proud of.

From opening band Bloodhound, the venue is full; the size of the crowd, and their clear appreciation and enthusiasm for the bands they’re watching, is heart-warming. It’s a testament to Yorkshire’s booming underground DIY punk scene – the support everyone involved has for each other is lovely to see, and RiffFest’s intense, bubbling atmosphere shows how close all the bands on the lineup are to breaking through into the wider rock scene. They all deserve it; there isn’t a single group playing tonight who don’t enthrall everyone in the room.

Bloodhound’s fuzzy DIY sound is laced with a sense of doom and foreboding not dissimilar to the likes of Drenge and Demob Happy – tension is built and sustained during the verses before the choruses explode with half-sung, half-screamed vocals, and like most bands on the bill, effect-laden instrumentals hypnotise the ever-receptive audience. Next up is Wakefield post-rockers Adore//Repel – their Explosions In The Sky-esque sound is incredibly impressive and uplifting, and the band themselves engage in plenty of banter with the crowd. If they keep up performances like this, they’ll be hitting up the main stage at ArcTanGent festival in no time.

Household Dogs put on a riveting show. Their Fizzy Blood-tinged desert rock is enhanced by the impressive stage presence of the band, who have the energy of a seasoned punk outfit – pacing through the crowd and jumping onto the bar included. Faux Pas were the highlight of the evening; the energy they generate is palpable and everyone in the crowd is riveted for their whole set. Their combination of Riot Grrrl-style punk and Placebo-influenced 90’s grunge is the perfect fit for tonight – watching lead vocalist Reuben Cowl perform is like watching a young Brian Molko, and the whole band plays completely effortlessly.

Next up is Brooders, who seem absolutely humbled by the turn-out; the crowd really gets moving for the fuzz-punk trio, who weave dreamscapes of utterly beautiful psych-rock melodies mixed with intense bass lines, that always culminate in raucous, cathartic breakdowns. South Yorkshire queerpunk outfit Hands Off Gretel never disappoint with their grunge fuelled sound; Lauren Tate is an utterly compelling frontwoman who holds the room in the palm of her hand, and the band as a whole are a brilliant example of the diversity within the DIY punk scene. Manchester rockers False Advertising bring the festival to a close with their fuzz-heavy sound; they switch instruments frequently, showing how multi-talented they are, and proving once and for all the north of England’s punk scene is at the movement’s forefront.

The overruling thought when exiting RiffFest, thoroughly invigorated and inspired by all that amazing punk, is that the north of England needs its own large-scale punk festival – a northern companion to 2000Trees, if you will. The Lending Room was bursting at the seams with talent tonight; a large-scale showcase of all these fantastic groups, and more, is something RiffFest could potentially evolve into in the future. Bring on next year’s event already!