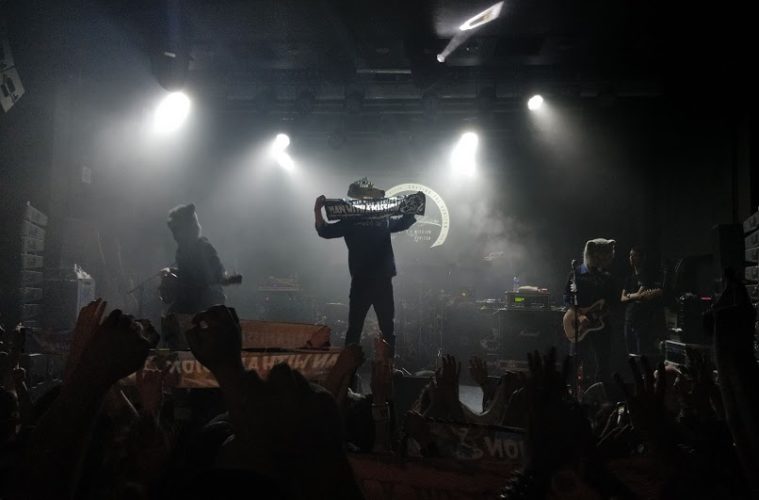 Man With a Mission – ULU, London

Bloomsbury has been quiet as of late, with barely a whisper to be heard as darkness descends on its streets. Only now, something’s started to stir. Not a shout, not a whisper, but a distant growl. A growl that can mean one thing and one thing only: Man With A Mission are back.

Drawing in a crowd of all ages and species, Sound of Pen’s most treasured Japanese rock band have brushed off their fur, perfected their best wolfish grin and chosen ULU Live as their hunting grounds for a night of rap-rock euphoria. Starting off strong with an assault of spiralling riffs, Take Me Under threatens to send the audience overboard, while the tapping paws to Get Off of My Way’s funky guitars soon give way to a mosh-pit of a rabid mindset.

Showing no signs of easing up, 2045’s rap-rock charm races along with a nu-metal style breakdown fierce enough to draw blood. Keeping the pleasantries to a minimum, Dead End In Tokyo’s boisterous ego struggles to fit in the humble university venue as the claws come out and the panting crowd is hounded together in a charged ball of fury. It’s one of those rare moments where the outside world pales in importance and all that remains is a group of strangers who are completely at ease together.

On the prowl for something a little more cuddly? A heart-warming acoustic rendition of Chasing The Horizon shows a softer side to the wolves and reminds the pack what a resting heart rate feels like. Hey Now’s relentless dance beat picks the pace back up and Fly Again gets the atmosphere soaring and demands complete crowd participation. Arms are proudly waved through the air amid dedicated howls of elation just in time for the self-proclaimed “furries from the Far East” to bid London a fond farewell.

Post-encore Broken People brims with attitude and lures out any remaining scraps of energy from the crowd until fan-favourite Seven Deadly Sins unleashes its uplifting chrous and takes the final bow of the night. While Bloomsbury may look unchanged as the sun rises the next day, there’s a change in the air that only Man With A Mission can explain.