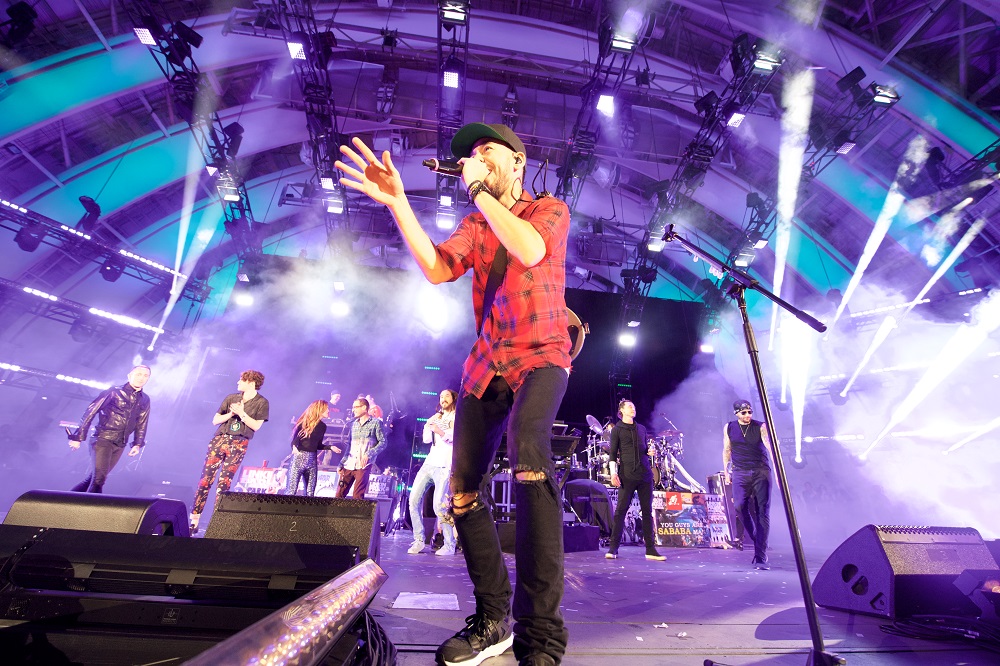 Have no doubt, the ability to be succinct is a strength – the art of concision is one worth developing. You may want to write a thesis-length report of an album you love but who really needs to read that? Give readers a taste of your excitement, share with them a short explosion of enthusiasm – but don’t dilute their experience by boring them to death with everything you think, everything you feel, everything you notice. The devil literally is in the detail, waiting there to club your readers over the head until they couldn’t care less any more.

Having said all that, this is going to be the longest review of all time. You don’t have to read it. You can just search on You Tube for: Linkin Park & Friends Celebrate Life in Honor of Chester Bennington instead. But I’m going to write it anyway. Because some moments, despite what you know to be for the best, you just don’t want to let go of and so you write and you write and you write…

And thankfully, after the writing’s done, you realise that, actually, what you really need to hold onto was never going to get away anyway. Chester, you’ll always be in our hearts. We’ll never let you go.

Three months later and still it seems impossible. Chester Bennington is gone. He dragged us up when we felt down and he changed our lives, but now we’ve got to manage without him.

Tonight’s concert is all about remembering Chester. Its starts like most shows end with everyone singing their hearts out from the off and opening song, Iridescent, is just one of the many, many Linkin Park tracks that’s been imbued with an extra poignancy in the wake of everything that’s happened.

One of the multiple side effects of CB’s passing is that Mike Shinoda is now exposed on stage in a way he never has been before. Not many bands have two frontmen but Shinoda and Bennington have always absolutely shared that leading role – how weird it must be for the remaining vocalist not to have his wingman. And yet he never falters. He’s not the strongest singer in the world but that only makes his voice seem fragile in a way that we now know everything is fragile.

It’s inevitable that the occasion is steeped in feelings of loss, but the concert also proves to be reviving in exactly the way the band want it to be. Over the course of the night the sad faces in the crowd are turned into happy ones. The healing process is underway.

Clips of Chester warming up his vocals like Freddie Mercury help move the mood in the direction of uplifted; footage of him singing songs about lollipops and unicorns even more so. Still, there is plenty of intensity. As Numb starts up, the stage lights go down and the band disappear out of sight. Bennington’s vocal blasts from the speakers and the crowd sing along. When the song finishes, a chant of ‘Chester’ starts up. Shouting his name to the sky feels like a crucial step on the path to recovery.

Having Shinoda speak directly to us feels equally important. ‘I don’t have the words,’ he says, ‘I don’t think any of us do.’ It doesn’t matter. Just hearing his voice helps. As does the sound of Shadow Of The Day coming to life. Yellowcard’s Ryan Key takes the mic. He’s the first of multiple guests that will join Linkin Park on stage over the course of this evening. For one night only, this band has got BIG.

As Shadow Of The Day segues into With Or Without You, the U2 song comes out of the Minutes to Midnight track in a way that makes you think it was buried there on purpose. The camera zones in on fans on the verge of tears but there are shots too of people pumping their firsts, veins almost bursting as they sing along. It’s an emotional time.

Leave Out All The Rest is next and the crowd sound like a choir as they back Shinoda’s lone vocal. Not that he’s on his own for long. Gavin Rossdale shimmers onto stage and then it’s up to Taka from One Ok Rock – who LP had been due to play with in Japan – to turn this into a full-on rock show. He tells the crowd to get their arms in the air and he attacks Somewhere I Belong like Chester would have. Forget that LP’s lyrics are now invested with an extra weight; they were hefty enough to start with and Taka’s performance proves just that.

A recording of Dave ‘Phoenix’ Farrell adds an extra sense of purpose to the proceedings. ‘My mum always told me if you’re not part of the solution, you’re part of the problem,’ he says, and we’re reminded that Chester’s death has to, needs to, count for something. We see film that tells us how much the singer wanted to be part of the community, and how much responsibility he felt to help others. So, take his lead. Look around you. Right now. Is there something you could be doing to help?

The sensation of bonding, or at least the importance of it, is at the heart of LP’s show tonight. At Hollywood’s Bowl, we don’t just seen Shinoda, Farrell, Rob Bourdon, Brad Delson and Joe Hahn; we see the whole family. There’s Jon Green, Ilsey Juber and Julia Michaels and, respectively, they perform Battle Symphony, Sharp Edges and Heavy, songs they co-wrote. “This is amazing,” says Michaels. She’s right.

After that, the amphitheatre is lit up by phones and glow sticks as Shinoda leads the crowd into One More Light, the song that more than any other has soundtracked the time since Chester’s passing. Its lyrics revolve around Bennington’s assurances that every person counts, that no one should underestimate their own value. The complicated relevance of those sentiments doesn’t need pointing out to anybody.

The words to Shinoda’s work in progress, Looking For An Answer, are equally pointed. Before beginning the track, he tells us it’s the first draft of something he started to write eight days after Chester’s death. ‘There’s an emptiness tonight,’ he sings, ‘a hole that wasn’t there before. I keep reaching for the light, but I can’t find it anymore.’ Cue everyone wanting to give the forever baseball-capped Shinoda a cuddle.

Not that tonight’s master of ceremonies is in the mood for moping. Waiting For The End offers our first real glimpse of old-school Shinoda as he whirls towards the front of the stage, rapping at full throttle. Then Sydney Sierota takes over vocals and her immaculate performance proves Echosmith are in possession of a singer ready to fulfil her own band’s ambitions. Then it’s back to Shinoda: ‘The hardest part of ending is starting again,’ he sings. If only he hadn’t had to find out how true that is.

Truth, though, has always been so central to what Linkin Park are about. It was the honesty etched into every single one of CB’s performances that first captivated us and never was the man more exposed than on LP’s first album. An hour and a half in tonight, and the words Hybrid Theory flash up on the screen. The crowd roars. And they roar again when Oli Sykes is introduced. Shinoda recollects the Bring Me The Horizon frontman’s first ever appearance in Kerrang, as a kid in the crowd at LP’s debut UK show. It’s a lovely link and if the concert so far has been absolutely heartfelt, it’s only now that the crowd see one of their own on stage. Sykes represents the faithful hardcore better than anyone and watching him sing Crawling would have made as much sense before Chester’s death as it does now.

A new pace has been set. Machine Gun Kelly arrives on stage and spits out Papercut with a ferocity that feels absolutely true to the original vocal. Then Jonathon Davis appears. Korn were the first of the nu-metal bands and Linkin Park were the last of any significance so it’s a perfect match, and Davis’ vocal on One Step Closer makes the bands’ common ground more apparent than it’s ever been before.

From here, the storm keeps brewing. Jeremy McKinnon infuses A Place For My Head with appropriate punch and, alongside him, Shinoda is absolutely flying now. As are the whole band. The crowd are hardly lacking spirit either. No wonder given that members of Sum 41 and System Of A Down are on stage and everyone is having fun. Shinoda says that’s exactly what CB would have wanted.

Messages come in from artists who couldn’t make it to Hollywood for the show: members of U2, Metallica, Thirty Seconds To Mars, Guns N’ Roses and even The Beatles all talk about Chester’s passion and professionalism, the amazing job he did as father and friend. And then Blink 182 take to the stage. They kick into I Miss You – what else could they play? – and then comes the fullest-pelt version ever of What I’ve Done.

It really does feel like we’re at some kind of alt-rock Live Aid. And there’s the suggestion that things could get even more mind-boggling when Shinoda announces that the next guests are his favourite of the night. For a minute, we’re worried that he’ll have to face some awkward conversations later, when trying to explain to No Doubt or Alanis Morissette or whoever why they weren’t his favourite, but then we realise where this is going. Shinoda’s talking about the fans. And so it is that he hands In The End over to us, and the night air is filled with a noise that is probably still echoing around California.

The job of following that is left to Chester’s wife, Talinda. She talks about the different funds and charities that have been set up in Chester’s name and that he supported in his lifetime and it’s another reminder that we need to find what goodness we can in this desperately sad time. Talinda reminds us that there are people who can help if you suffer from depression and then we hear from Chester himself.

On the screen, his image comes up as big and bold as ever. It’s footage from his last ever concert, which took place in Birmingham just two weeks before his death, and he tells us that the one thing that can’t be defeated is love. And if you haven’t thought too hard about that before, think about it now. Could anyone stop you from loving your pet? Or your best friend? Or your parents? Or your brother or sister? Or your son? Your daughter? Of course they couldn’t. Nothing anyone could ever do to you could destroy that love. Because love is really that strong. And that’s the message flowing tonight.

Flowing with it is a whole river of energy. Shinoda and gang have plenty of it to burn. They inject as much of it as possible into A Light That Never Comes and everyone in the crowd reaches their hands into the air.  From there, the night hurtles towards a conclusion with M. Shadows and Synyster Gates joining in for unforgettable performances of Burn It Down and Faint. And then the concert comes to an end in a snowstorm of ticker tape. All the night’s performers are on stage and the spirit of Chester Bennington is almost tangible.

What comes next, we don’t know, but what brought us here, we won’t forget.