LiFe LeSSonS bY GrEy DaZE: iT WiLL aLL aDD uP 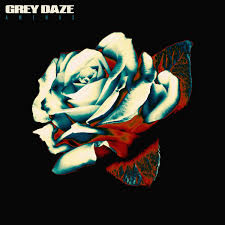 Deep breath. This is going to be emotional. You know that already. And – let’s be clear – the first couple of listens to Amends will absolutely be charged by your own relationship with Chester Bennington. You won’t hear Grey Daze as much as you’ll hear the Linkin Park singer tornadoing his way back into your life.

Then you’ll sit down (because you’ll definitely need a sit down) and appreciate this record on its own terms. It’s as quiet as it is loud – like the grunge classics that influence it and the Hybrid Theory album it predates – and Chester’s crackly, crystal-clear voice captures that up and down feeling of being alive so perfectly. ‘What do you think?’ the singer asks at the end of Morei Sky. Well, I’ll tell you! I think it’s bonkers that Grey Daze didn’t become superstars when they first wrote these songs.

It’s encouraging, though, that twenty-five or so years later, the eleven tracks here are getting some wider recognition. It should give us all hope that the work we’re doing right now does actually count for something. Those sketches you’ve stuffed in a drawer, those riffs you’ve stored on SoundCloud, those ideas you’ve logged in your diary – they’re worth more than the world might realise at this moment. (Let’s hope the same is true of my homemade sock puppets…)

Ultimately, Amends – like all truly great records – works on two levels. There’s the music itself – that you can listen to this album on loop speaks volumes for how powerful and poignant the songs here are. Then there’s the message – that life is a jigsaw and that maybe you won’t be able to see how all the pieces fit together until way after you first thought about giving up. Just make sure to keep believing. In life. In its mad grand scheme. And – most importantly – in yourself.

Listen to Bush and learn another life lesson.