Faint December 16: In Between 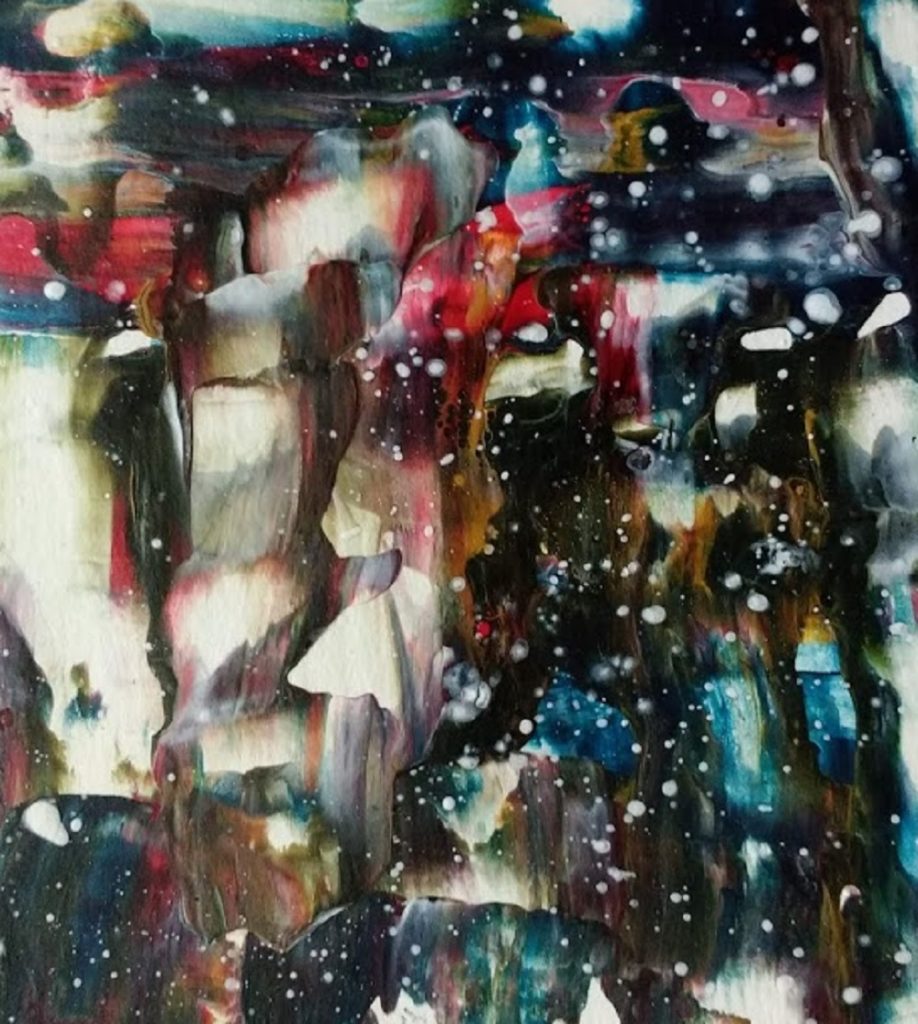 Sitting on the low wall outside my form room, I wait for Miss Lurg to let us in. I don’t know why she can’t be like the other tutors, the ones who seem to realise their form groups are made up of actual human beings. Miss Lurg thinks we’re a different species. And maybe we are. But if that’s the case then it’s definitely not us who aren’t human – it’s her. From where I’m perched, I can see her all alone in the nice, warm classroom and I know she won’t open up until she’s absolutely forced to.

Whatever. I try to cut myself off from the noise of the rest of the form group. My mind flickers back to yesterday morning and I feel a tight, tense feeling in me at the thought of that gloopy cloud I’d woken under, at the thought of what had felt like some kind of tiny but fearsome intruder eating up all my oomph.  I can’t feel it in the same way now, but I can still feel some sort of echo of it. It’s soon drowned out, though, and I know Charity has arrived.

I have no idea what planet Charity lives on. Whichever one it is, she’s its leader, its dictator. I’ve never seen her smile. She rules with an iron fist and if you’re living in her vacuum it’s a life of fear. I know that because I see the looks on her underlings’ faces, the way they say something and then look at Charity to check that she approves. Or at least that she doesn’t disapprove. As far as I can see, she doesn’t approve of much unless she’s done or said it herself. She likes to scorch and she likes to scorn. She’s like a wild fire, there’s no point throwing water on her, she won’t notice. Not the metaphorical kind anyway. If someone was to literally tip a full bucket of water over her head, I can’t imagine what kind of hell would break loose. It would be carnage. Either that or she’d disappear in a puff of smoke, her myth extinguished. Or perhaps she’d triple in size and start eating Year 7s for breakfast. I smile to myself. I wonder if this counts as the kind of good moment I can discuss at the supper table.

Miss Lurg appears in the doorway. As usual she sends daggers in all directions even though no one’s doing anything wrong. Each morning, we’re to sit at our desks and read and she won’t accept any reason for not toeing the line. She throws detentions around as if each one earns her points. Maybe it does. Maybe there’s a chart in the staff room and each teacher gets a sticker for every detention handed out. Miss Lurg has probably got that competition wrapped up already despite the fact that we’re less than half a term into the school year.

There are various types of teacher. Our drama teacher, Mr Corzone, and Miss Lurg are at opposite ends of the spectrum. Corzone’s new but likes to pretend he’s been doing the job for years, that his style is super-relaxed and that he purposefully invests pupils with a spirit of independence. None of us are fooled. His lessons are ‘relaxed’ because he doesn’t know how to control them and he might think that he looks cool on the surface but we can all see his little duck legs paddling frantically under the water. He’ll have a heart attack one day and it won’t surprise me one bit. Miss Lurg is different. Whereas Corzone avoids giving detentions because he thinks each one symbolises his failings as a teacher, Miss Lurg’s insecurities manifest themselves in a less passive form. She needs everyone to be doing exactly what she says at every second of the day and if you’re not playing along she responds as if you’ve threatened a rebellion capable of bringing humanity to its knees. Miss Lurg thinks being a good teacher is about a silent classroom and still students. If she can get every single one of us to think in precisely the same way she thinks and to feel at all times the exact way she feels, she believes she’s succeeded. In their own ways, both Corzone and Lurg are a nightmare. I know they both think they have girls like me on their side because we smile and do our best to get on with whatever they want us to get on with, but they don’t. Not really. I mean I’m not on the same side as Charity, or any of the other kids like her – they’re the ones to blame for the teachers acting like mad people in the first place – but neither am I on the teachers’ side. I’m on my own team. It’s small but it’s got its head screwed on.

I sit at the back of my form room, out of the firing line. There’s no way I want to be sitting in between Miss Lurg and Charity. They’re constantly eyeing each other and it’s absolutely impossible for Charity to get through these morning sessions without receiving a detention. I almost feel sorry for her. I don’t think she should act in the extreme way she does, but on some level I think it’s actually impossible for her to be as silent as Miss Lurg demands her to be. And so she begins each day with a punishment. That must be rubbish.

“Tell me what you’ve read on that page,” Miss Lurg asks suddenly.

My head jolts up in case she’s talking to me, but her focus is on Charity.

“I wasn’t doing anything,” Charity retorts.

“Exactly,” Lurg replies, and she keeps a straight face but it’s obvious she thinks she’s being really clever. Like we haven’t heard teachers deliver the same line a hundred times before.

Charity glares at her and Lurg speaks again.

“If you’re actually reading that book you’re meant to be reading, tell me what’s happening on the page in front of you.”

She makes sure her voice sounds composed. She wants to project the idea that she is too stone-cold for emotions, that there’s no way she’d let a fifteen-year-old girl upset her equilibrium. But that’s hooey. I can feel Miss Lurg’s desire to squash Charity in her voice. I mean, I think Charity’s despicable but still I can recognise that this is not fair or right.

“You’ve been staring at the same page for the last five minutes,” Lurg continues. “That’s not reading.”

Inwardly I sigh and I can’t help but faintly shake my head. If Charity’s opened a book and is sitting quietly, then that’s Charity putting in at least as much effort as it takes me to go one step further and actually read. Probably more. I enjoy reading; it’s really no hardship to sit down and get my book out. But Lurg doesn’t see that Charity even having a book with her is an achievement.

“Tell me what’s actually happening right now in that book. Prove me wrong.”

It’s under her breath but loud enough for everyone to hear. This is normal Charity territory but still most of the class can’t help but gasp.

“Another afternoon in detention it is then,” Miss Lurg decides triumphantly.

The tone of her voice implies that the rest of the class should be impressed by how well she’s handled the situation. She hasn’t shouted or visibly lost her temper. But she has created a situation out of nothing. It wasn’t necessary and now Charity is riled up. Good luck to her next teacher.