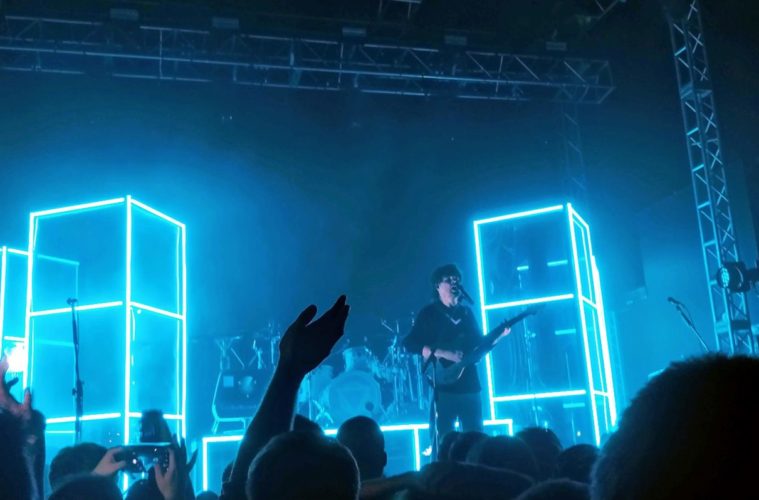 If you ever want to see a true pick-n-mix group of people, an Enter Shikari crowd is the perfect place to be. Teens eagerly bounce on their toes, married couples chat amongst themselves, beefy metalheads sip on their beers, all harbouring the same excitement for the exhilarating performance that is sure to come. The band’s logo is permanently etched into nearly every concertgoer’s skin, the crowd a calm sea of triangles that is soon to erupt into a crashing, pulsating mass of chaos.

Black Peaks expertly start off the night on a high, Will Gardner’s vocals entirely capturing the audience from the off. The Brighton rockers have fans in the audience, a girl up on someone’s shoulders during Electric Fires and even a crowdsurfer during Can’t Sleep, and you can see the appreciation on their faces. This brilliant performance is followed by Palaye Royale, who receive a slightly stale reception due to the controversy surrounding their band, but definitely have a number of heads bouncing along to their Arctic-Monkeys-meets-punk-rock sound.

But now it’s time for the main course, and everyone is absolutely buzzing as The Sights stars to ring out through the venue. As soon as the crowd hears Rou Reynolds singing ‘are you staying awake for the lift-off tonight?’, the chaos officially ensues. Being in the crowd truly does feel like an ascension to another realm, a constantly vibrating realm of moshpits and elated grins.

The quartet sneak in some brilliant throwbacks, specifically songs from Common Dreads as a nod to its tenth anniversary this year. Hectic makes people’s stomachs drop, young and old fans alike all screeching out ‘AND IT SEEM THAT NOTHING NOW WILL EVER CHANGE’ in unison. The appearance of Gap in the Fence is an even more surreal blow, this tour being the first time it’s been knocked out since 2013. The Leeds crowd are also blessed by a performance of Rat Race, a rarity that is perhaps one of Enter Shikari’s most fun live songs, its unstoppable pace and breezy, carefree chorus making for some amazing moshpits.

What’s so beautiful about Enter Shikari is how unifying their live shows feel. Even when you’re not forced to be close by the swirling pits, the slower tracks only lead to people insisting for you to get on their shoulders. Airfield is a welcome break in the mayhem that joins everyone together, people throwing their arms round one another and crooning along to Reynold’s soft vocals.

Though this is truly the calm before the storm… the beast soon comes. The Quickfire Round. Experiencing this in a festival setting (see our 2000trees review here) is a lot less sweaty than in a packed venue, that is certain. From the start of Sorry, You’re Not a Winner to the end of Anaesthetist, it’s a true frenzy. You silently pray that you could have a sip of water, but you also can’t stop moving because you don’t want to be the first to give in. The round closes off and is met by the politically charged Take My Country Back, its message highlighting just why the crowd feels so wholesome — with messages of love and acceptance, how could any fan of Enter Shikari be anything but welcoming?

The closing track Live Outside is met with seemingly hundreds of crowdsurfers, every one smiling up at the ceiling with arms outstretched, basking in the freedom the song connotes. Reynolds is onstage skanking, his dance moves entirely carefree in a way that only heightens the energy of the song. Every single person in the room gives it their all for the final track, knowing it’ll be their last chance to sing their heart out until the next time Shikari come to town.

It’s amazing to think that these four guys from St. Albans have come all this way, have turned into a group that create such magic onstage. Twenty years as a band has lead to them having some of the most amazing fans around, yet the years have shown no decrease in energy. Enter Shikari are true musical juggernauts, and nobody can stop them.