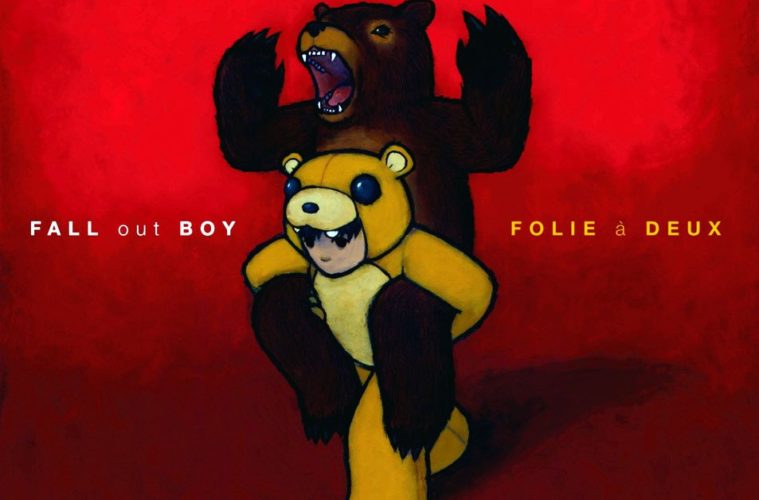 10 Years Of Folie a Deux, An Underrated Masterpiece…

Its’s been ten years since the release of Fall Out Boy’s third record, Folie à Deux. It’s been ten years of everyone collectively realising they were silly to ever think this album was anything short of utterly genius…

It’s December, 2008. Fall Out Boy have three iconic, instant-classic records under their belt already; they’re hailed as emo Gods by everyone with ears, Pete Wentz is seen as the Shakespeare of pop-punk, and Patrick Stump’s voice is matched only by his protégé Brendon Urie of Panic! At The Disco fame. Fall Out Boy seem, to the public, to be unbeatable. But the band know they’re cracking under the pressure. They know that the album they’re about to release, Folie à Deux, is a risky one, and probably the last they’ll release before a much-needed break. It’s possibly one of the most self-aware, deliberately ironic albums any band has ever put out, and it’s also an album that went vastly underappreciated before it was too late.

‘Only get lonely when you read the charts’, Stump belts out on the utterly genius, practically prophetic Coffee’s For Closers – this is one of many songs on Folie in which Wentz predicts the band’s undoing at the hands of the growingly critical media and vacantly expectant fanbase. This album tells the future; it may as well have been a huge billboard reading ‘stardom and celebrity culture is going to kill this band, so please stop making us subscribe to it’. Yet no one recognised this warning until FOB went on hiatus and suddenly everyone realised that Folie, an album that didn’t perform too well and was slated by critics and fans alike, was actually ingenious and absolutely packed full of incredible songs that challenged conventions whilst remaining unbelievably catchy and radio-friendly. Damn, everyone said, kicking themselves, forced to wait 5 years before FOB return in 2013 with the brilliant Save Rock And Roll.

I Don’t Care and America’s Suitehearts were the two tracks that charted highest on Folie; lyrically about similar subject matter, and swaggering fourth with a cockiness that parodies the ridiculousness of celebrity culture and vacant fame, both songs quickly became emo anthems and are still played in rock clubs all over the world now. Wentz and guitarist Joe Trohman interweave bluesy basslines and riffs as Stump croons arrogantly ‘I don’t care what you think as long as it’s about me’, and ‘I’m in love with my own sins’, mocking the media they so desperately did not want to be aligned with. The aforementioned Coffee’s For Closers dances into your headphones with triumphant drums that contrast sharply to bluntly negative lyrics like ‘I will never believe in anything again’, encouraging the crowd to ‘throw (your) cameras in the air and wave them like (you) just don’t care’ – a crowd who are probably oblivious to the fact this song is about how fake and empty their fan culture feels.

When Wentz isn’t attacking the downsides of stardom with teeth bared, he’s pouring his heart out on tracks such as album opener, Disloyal Order Of Water Buffaloes. Undoubtedly one of the most heart-wrenchingly relatable FOB songs of all time, the pompous instrumentals and vocals are tragically self-aware and sarcastic, as Stump practically howls ‘so boycott love, detox just to retox’ and ‘nobody wants to hear you sing about tragedy’. DOOWB gets listeners caught between crying at how much they relate, and laughing at the fact that they DO relate to lyrics that are so obviously Wentz just poking fun at his own depression in a deliberately over-the-top way. 27 is another track that sees the lyricist wearing his heart on his sleeve, as he laments ‘my mind is a safe, and if we keep it, then we all get rich’ – the hiatus couldn’t have been more imminent, as Wentz is so aware of the fact he’s selling his emotions to vulnerable kids and feels bad about the fact they relate to someone as messed up as he perceives himself to be. After all, the title references the infamous ‘27 club‘, something Wentz and his peers felt incredibly lucky he didn’t become a member of.

What A Catch, Donnie, is the track that broke millions of people’s hearts all at once when they first heard it. One of the band’s only ballads, it felt like a goodbye, with its numerous features from artists who were previously aligned with FOB/Wentz’ label who all sing snippets of the Chicago rockers’ greatest hits as the track draws to a close. The piano and strings all escalate in time with one of Stump’s best vocal performances ever, before all falling away to just the frontman singing ‘I’ve got troubled thoughts and the self-esteem to match, what a catch’. When paired with the song’s iconic music video, featuring objects from previous videos just drifting through the sea around a sinking ship, it truly felt like FOB were never going to come back.

It was never the lyrics, necessarily, that alienated fans, but the experimental path certain songs took. Now, we realise that Tiffany Blews is just brilliant; listeners may not have liked the bluesy, rhythm-concentrated deviation from FOB’s punk-based, melody-driven prior work at the time, but nowadays it just feels smooth and natural. The inclusion of Lil Wayne in the bridge saw punk-purists turn their noses up but since Save Rock And Roll saw a successful rap collaboration on The Mighty Fall, it now seems like a fantastic decision made by the band. 20 Dollar Nose Bleed is musically genius – it sounds like a proudly American forties-style war anthem, complete with jaunty piano, that ironically utterly rips to shreds the Bush administration and the wars he plunged the US into. Plus, it features Brendon Urie in a collaboration that couldn’t be more perfect; it’s almost too much vocal talent in one song to handle. Elsewhere, w.a.m.s. is a darkly sensual, bass-led banger with a disco backbeat, and album closer West Coast Smoker features Blondie’s Debbie Harry and is an Aerosmith-esque classic rock anthem that takes aim at the exact thing classic rock always used to glamorise –  mindless drug addiction to cover up depression and anxiety. The bridge includes a gimmick only FOB could pull off – ‘knock once for the father, twice for the son, three times for the holy ghost’ Stump sings as the bass drum keeps count on the amount of ‘knocks’.

Folie is stupidly brilliant and brilliantly stupid. It’s quintessential FOB. It’s an epic album that lyrically and musically follows the epic tale of an epic band, before they go on an epic hiatus only to smash all fan expectations with an epic comeback in 2013. Everything FOB did from their inception to the release of Save Rock And Roll seemed meticulously planned out it couldn’t have fallen into place so perfectly – but really, Stump, Wentz and co. are just very talented men who somehow predicted their own downfall and rise from the ashes before it even happened. Folie à Deux proves the importance of records that are “growers” – because damn, if it’s not now one of everyone’s favourite emo albums of all time.